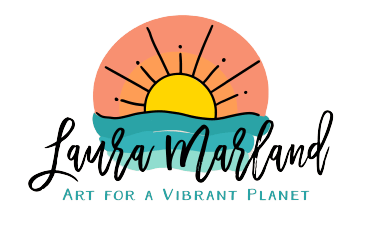 The framing of the shot—deciding where the edges of the picture should be—may be the most creative part of the whole act of making many photos. Placing the edges of the shot limits the scene, bestowing an arbitrary order on the arrangements of its parts. The flowers that draw your eye are the left third of a certain picture because I moved the camera to place them there.

Composition is sometimes no more than this simple but crucial act—deciding where the edge of the picture should be.

I can doctor up and alter what you see, but these days, I usually don’t. I chose to present the-thing-itself, the land as it appeared to me, rather than pumped-up color and special effects.

This means I am not so much a creator as a purveyor of scenes. I may be objectifying the world by turning landscape into calendar art.

I am probably not the first to point out that these types of landscape photos are like pin-up shots of the natural world.

Calendar-art girlie shots announce: these are prized, valuable women. Calendar-art landscape shots say that these are the vistas worth caring about, worth preserving, because they provide the most pleasure to those who gaze upon them.

Does beauty—yes, I know that’s a problematic term—have any purpose other than sensual pleasure?

As pointed out by Michael Austin in his introduction to a selection by Elaine Scarry, discussed below, many political critics would say that beauty is a distraction from more important social issues, and many feminists would add that the concept of beauty objectifies people, especially women.

I would say that the way in which the concept of beauty is discussed may objectify women, but the concept itself need not.

One rather amusing example is Edmund Burke’s 1757 treatise, A Philosophical Enquiry into the Origin of Our Ideas of the Sublime and the Beautiful, in which, searching for words to define beauty, he keeps returning in a circular manner—or perhaps an obsessed manner—to the bodies of women.

He begins by discussing the sublime, by which he means that which inspires admiration and awe, but not love. Love is inspired by an entirely different set of forms. The body of the human female is the readiest and clearest example. A beautiful woman, he writes, is small, smooth, with a body that shows gradual variation, delicacy, and soft variations of color.

The beauty of women is considerably owing to their weakness, or delicacy, and is even enhanced by their timidity, a quality of mind analogous to it.

However, we can consider Burke’s need to discuss the female form as Burke’s problem. This does not invalidate his short list of the qualities of beauty.

Certainly, there are other qualities and other effects.

In her 1999 book, On Beauty and Being Just, Elaine Scarry, a professor of English and Aesthetics at Harvard, argues that beautiful objects inspire an admiration of the idea of equitable distribution.

Instead of focusing on Burke’s qualities, she points out that beauty has repeatedly been found to be symmetry.

And what does symmetry have to do with justice? She turns to Augustine in De Musica: “The higher things are those in which equality resides, supreme, unshaken, unchangeable, eternal.”

In things that are beautiful—in musical notes, in “the body’s soft, smooth surface, in cakes and roses—Scarry writes that beauty is “the soul is in quest of nothing except equality and similitude.”

Beauty, she believes, because it is largely about symmetry, makes us think of just and equal social arrangements. Beautiful objects, which fall within the scope of our senses, inspire us to long for justice, which does not. Justice is abstract and consists of isolated, scattered events that can’t be grasped by the senses.

I find the argument tenuous at best. For one thing, her concept of beauty seems conveniently limited to support her argument.

It also seems devised to salve liberal guilt about enjoying the beautiful—an elitist, possibly even sexist pursuit. For me, for now, the pleasure inspired by the beauty of landscape is quite sufficient, and I feel no twinges of guilt about it.

For one thing, the result of justice and equality is often the freedom to enjoy simple, sensual pleasure.

For the Edmund Burke passages, I used the facsimile of the 1757 edition found on Archive.org.

For the Scarry material, I used Michael Austin’s anthology, Reading the World: Ideas that Matter.

Note, again, that I did not originate the idea that landscape photography can be compared to pin-up photography. I have yet to figure out where I read that.

The photo accompanying this post is one that I took with an IPhone X on May 1, 2021. It's a shot of Lake Superior, seen from Park Point in Duluth, Minnesota.